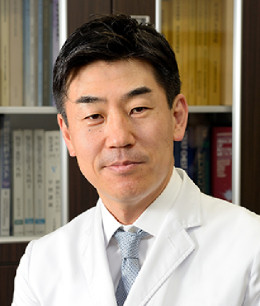 I was registered as the youngest member of the former Second Department of Surgery in 1994. At that time, the Department of Surgery mainly treated malignant tumors of various organs and was also involved in lung transplantation research. In 1998, the first living lung transplant in Japan was successfully performed under the leadership of Dr. Nobuyoshi Shimizu, the 5th professor, and Dr. Hiroshi Date, the 6th professor. I was in my fifth year of medical school and still remember those days. Since then, many lung transplants have been performed based on the foundation established by our predecessors, incorporating new innovations, and our achievements have attracted attention not only in Japan but also in the world. In addition, the excellent medical treatment and research centering on surgical treatment for lung cancer, malignant thoracic tumors, breast cancer, and endocrine disorders continue to this day. My goals during my tenure at Okayama University are to further develop surgical treatment and research in thoracic, breast, and endocrine diseases, and to disseminate the results of my research to the world, as well as to contribute to local medical care with a firm focus on the Chugoku and Shikoku regions where the University has its roots.

The key to achieving this goal is the development of excellent human resources. The kind of human resources we wish to nurture are "surgeons who aim for the world and focus on the local community. Since 2010, our department, together with the Department of Gastroenterological Surgery and the Department of Cardiovascular Surgery, has been implementing a program to train surgical specialists as the Department of Surgery of Okayama University. During that time, we have trained approximately 30 surgical specialists. We are also preparing a program for the new surgical specialist system. The foundation of the program is the excellent group of affiliated training hospitals of Okayama University, which is the core of regional medical care mainly in Chugoku and Shikoku. We invite you, students and graduates of Okayama University and other medical schools around the country, to learn and develop surgery together at Okayama University Hospital, and to become "surgeons who aim for the world and look at the community. The door to our department is as wide open as your future.